Wait But Why: A List of Tim Urban's Best Ideas

Tim Urban is an internet nerd. 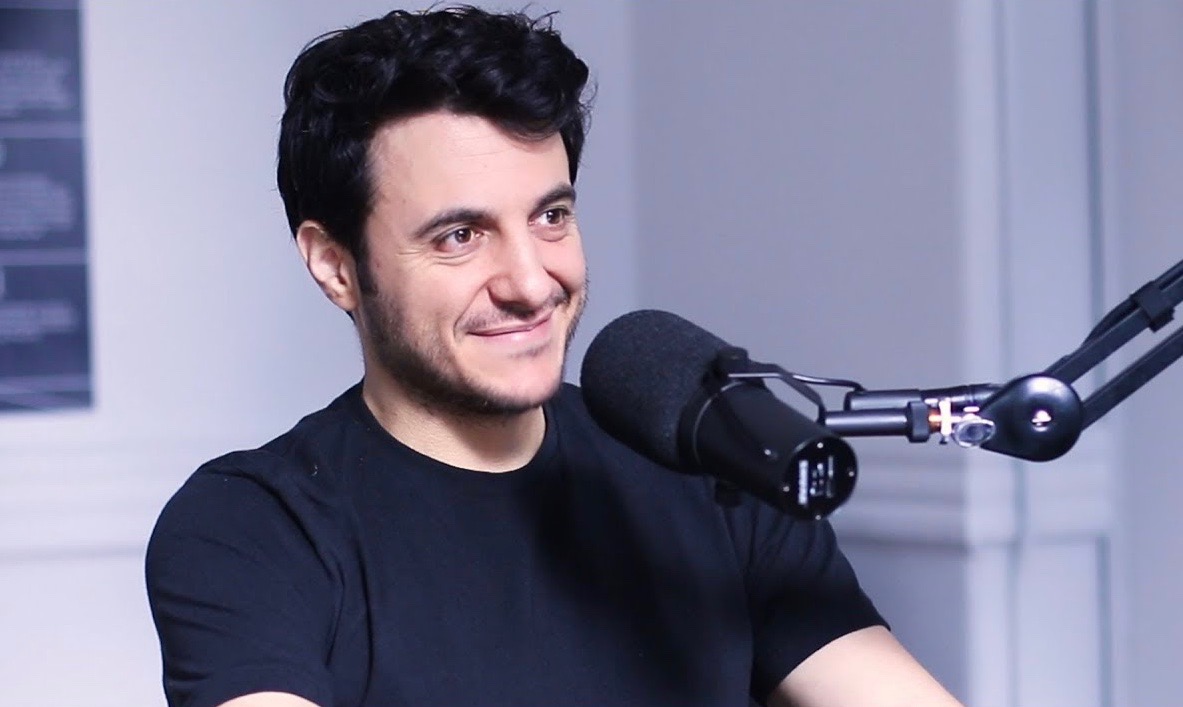 He is my favourite blogger of all time, sent to this planet to observe a phenomenon, break it down to its absolute core elements and then describe it in a memorable way using analogies, diagrams and humour.

He is a master at creating layers of abstraction. He introduces small building blocks and lines them up neatly until you come away with a deep understanding of a complex topic. So it’s not surprising that his posts are tens of thousands of words or more long.

With every post you read, there is life before that post and life after that post. They leave a lasting impact, they form a type of mental model. A novel or deeper way of thinking about a topic.

Let’s cover some of his best ideas and abstraction layers.

The name I use to call Tim Urban’s ideas.

In 2015, Tim received a call from Elon Musk’s assistant asking him to write about his ventures to help people understand why he does what he does. 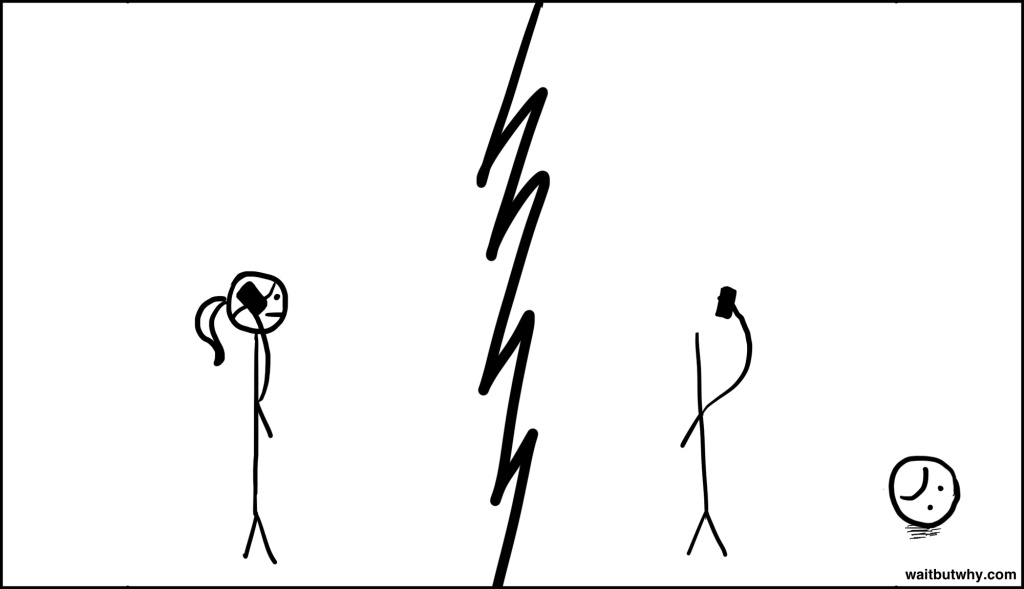 Naturally, Tim jumped at the opportunity and wrote some mind-bending posts about SpaceX, Tesla, Solar City, Hyperloop and Neuralink. But in addition to unpacking the why of what Elon does, Tim used this opportunity to understand “why Musk is able to do what he’s doing”. What his “secret sauce” is and Why people like him are so rare.

Tim compares the two types of thinking that separates us and history-changing humans like Elon, to being a cook vs being a chef. “When I say chef, I don’t mean any ordinary chef. I mean the trailblazing chef—the kind of chef who invents recipes. And for our purposes, everyone else who enters a kitchen—all those who follow recipes—is a cook.”

“The chef reasons from first principles, and for the chef, the first principles are raw edible ingredients. Those are her puzzle pieces, her building blocks, and she works her way upwards from there, using her experience, her instincts, and her taste buds.” whereas, “The cook works off of some version of what’s already out there—a recipe of some kind, a meal she tried and liked, a dish she watched someone else make.”

When we think of Elon, we think “that he’s a visionary, that he can somehow see things we cannot. We see it like this:” 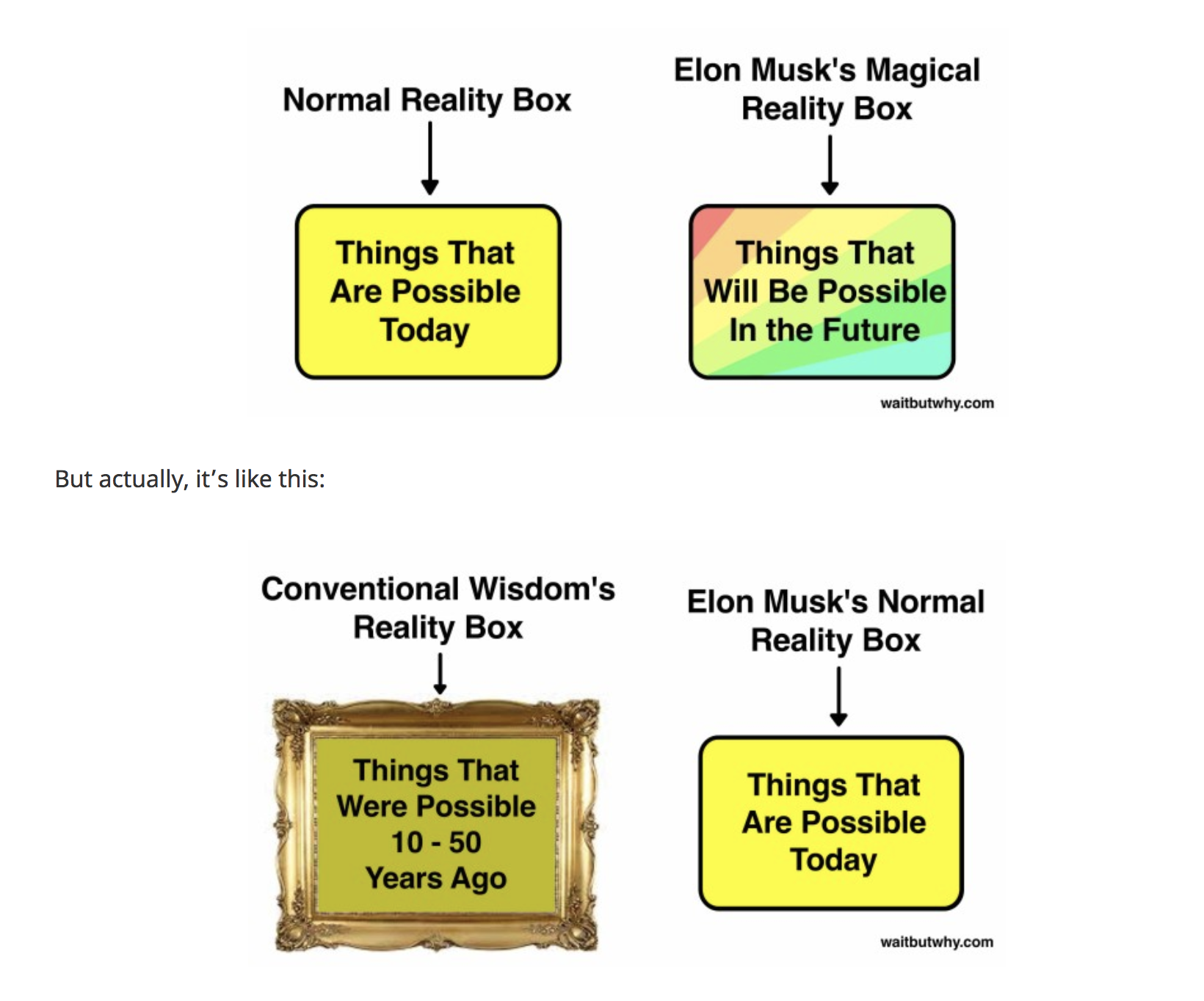 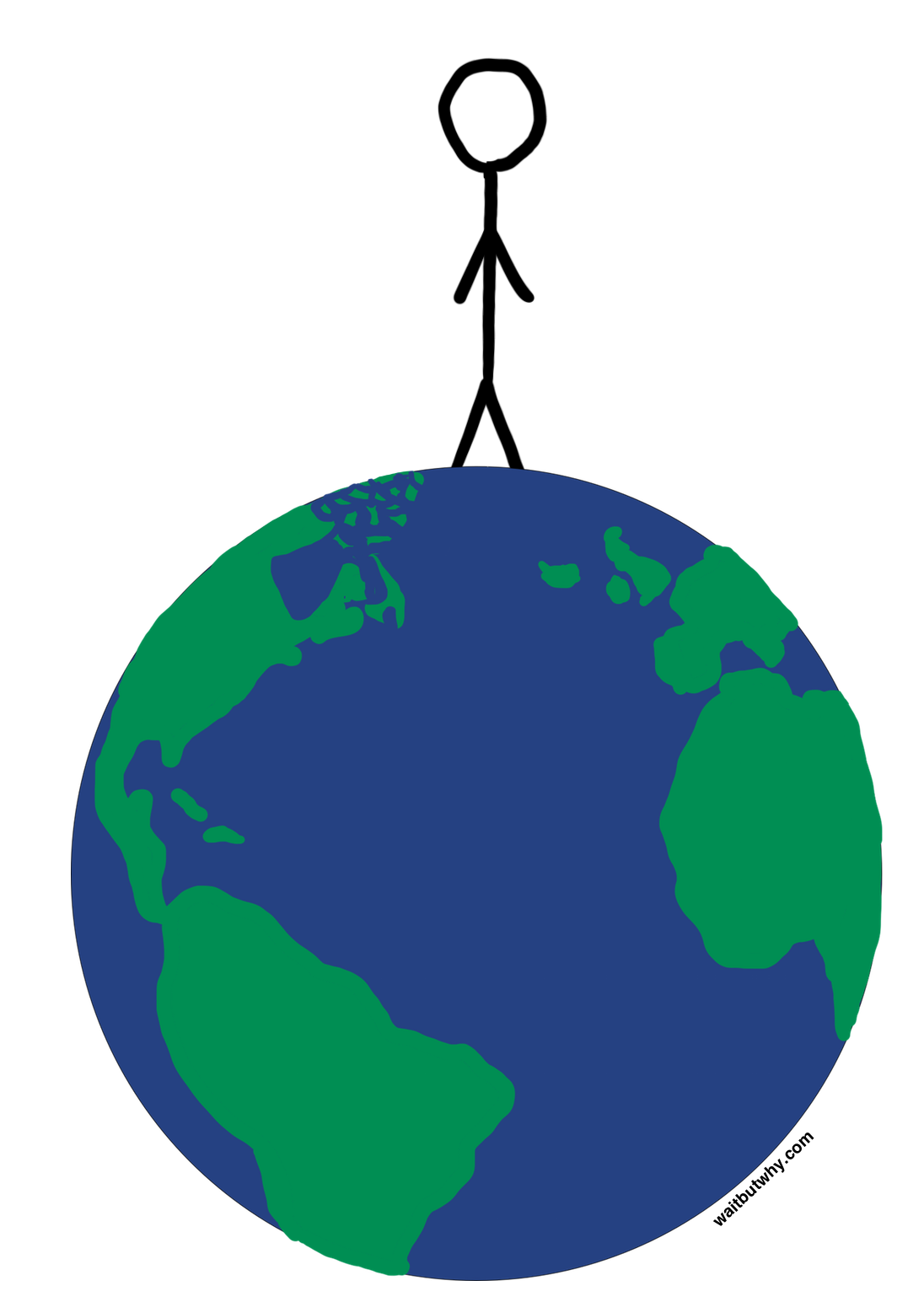 The Human Colossus — the collective knowledge that humanity has built — is the idea that an individual is unable to create even a pencil on their own, but collectively and through our large body of accumulated knowledge we are able to land on the moon.

As Tim puts it, “With the entire body of collective human knowledge in its brain, the Human Colossus began inventing things no human could have dreamed of inventing on their own—things that would have seemed like absurd science fiction to people only a few generations before.” 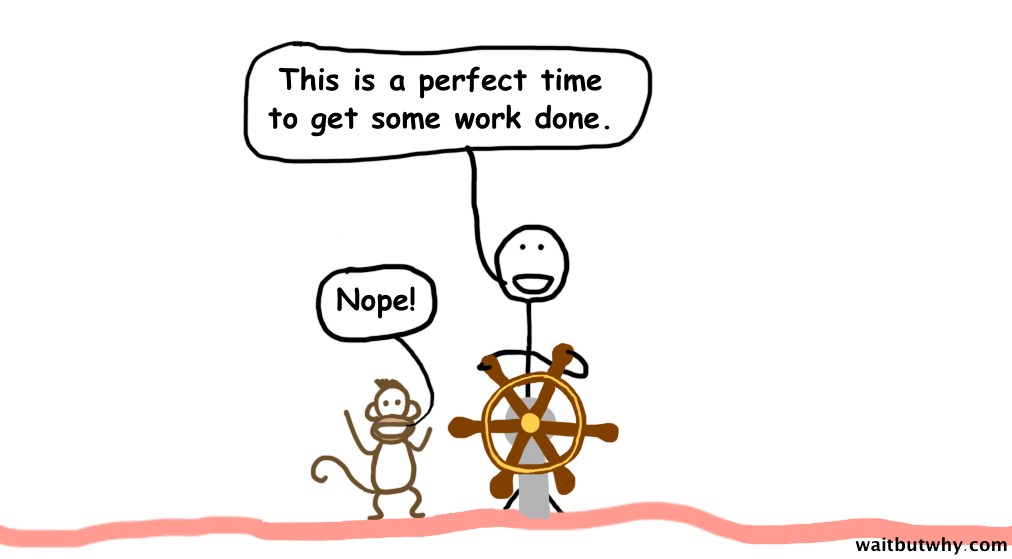 The instant gratification monkey is the creature responsible for procrastination.

“The fact is, the Instant Gratification Monkey is the last creature who should be in charge of decisions—he thinks only about the present, ignoring lessons from the past and disregarding the future altogether, and he concerns himself entirely with maximizing the ease and pleasure of the current moment. He doesn’t understand the Rational Decision-Maker any better than the Rational Decision-Maker understands him—why would we continue doing this jog, he thinks, when we could stop, which would feel better. Why would we practice that instrument when it’s not fun? Why would we ever use a computer for work when the internet is sitting right there waiting to be played with? He thinks humans are insane.” 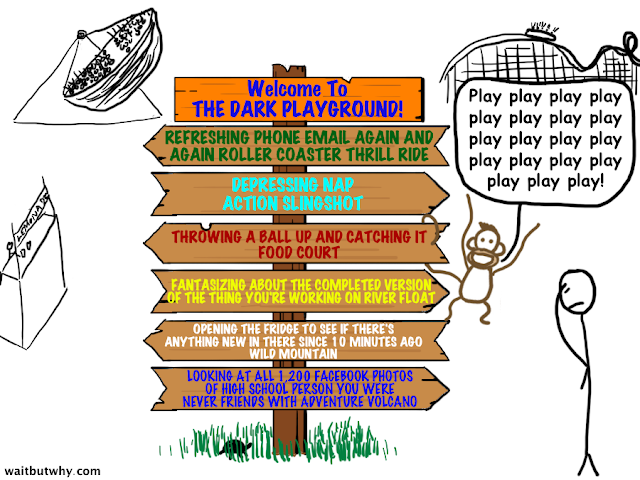 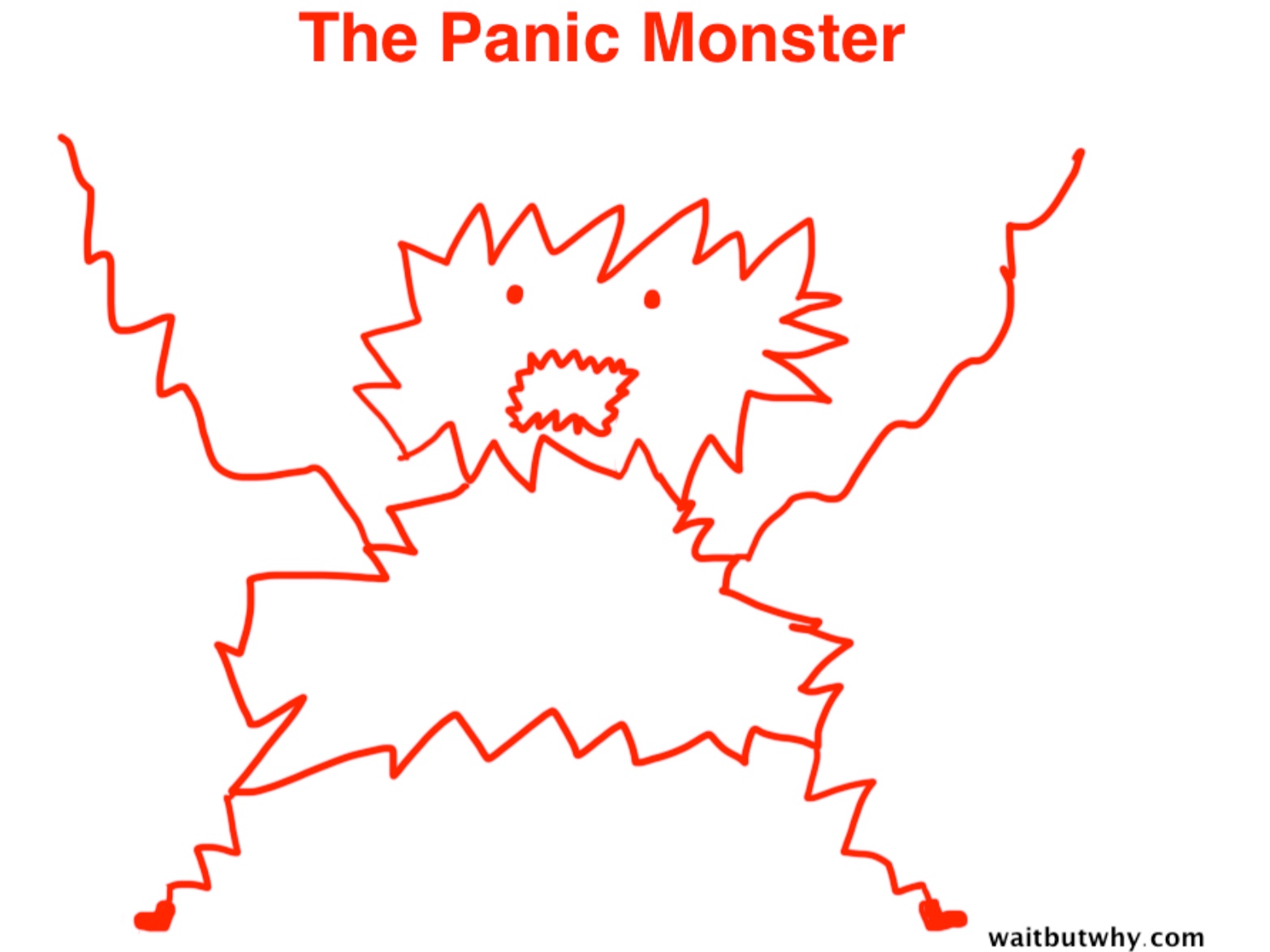 “The Panic Monster is dormant most of the time, but he suddenly wakes up when a deadline gets too close or when there’s danger of public embarrassment, a career disaster, or some other scary consequence.”

The social survival mammoth is yet another elegant abstraction character that demonstrates why we are evolved to care so much about what others think. 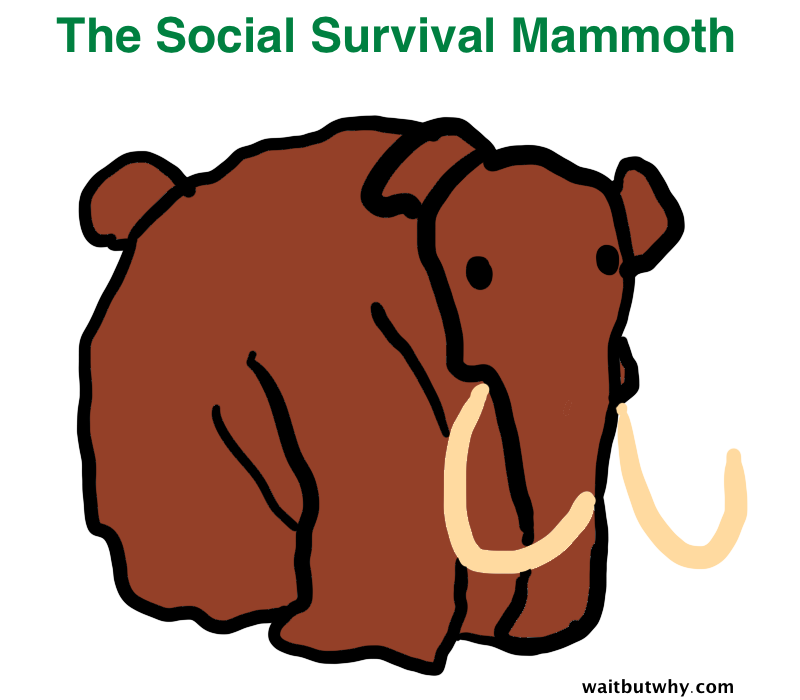 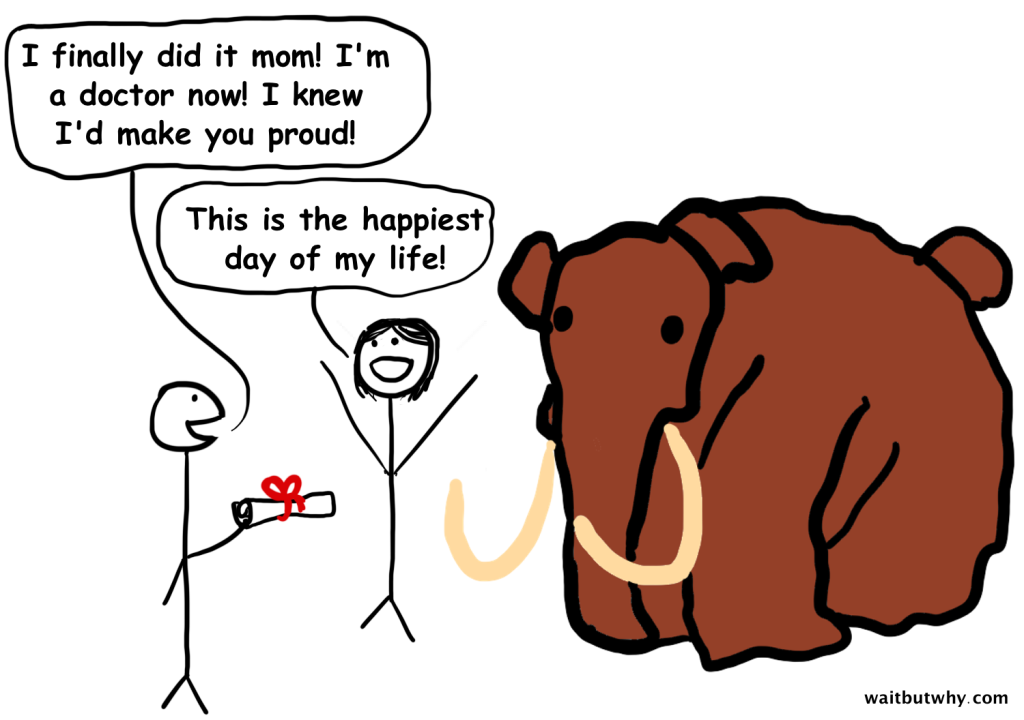 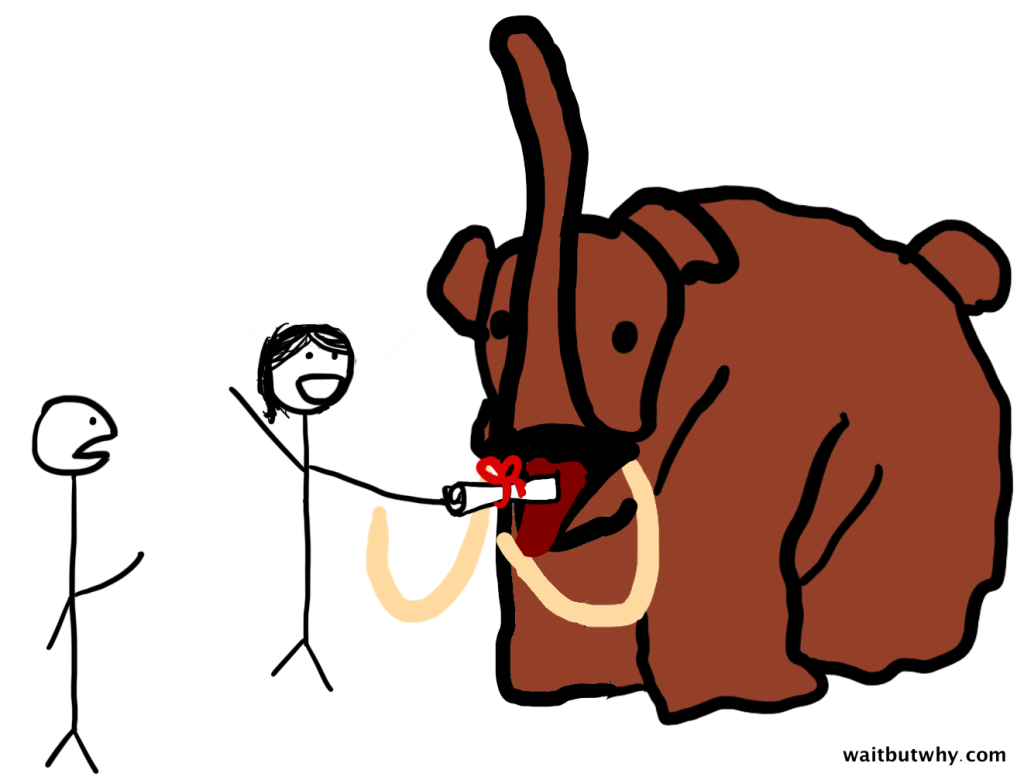 “We crave the Puppet Master’s approval more than anyone’s, and we’re so horrified at the thought of upsetting the Puppet Master or feeling their nonacceptance or ridicule that we’ll do anything to avoid it. When we get to this toxic state in our relationship with a Puppet Master, that person’s presence hangs over our entire decision-making process and pulls the strings of our opinions and our moral voice.”

Why is Wait But Why Different…

Tim disappears for months at a time. It’s been a year since his last post, but creating abstraction layers requires incubation. To give you some perspective, I counted at least 14 layers of abstraction in this post. Not sure what I mean by abstraction layers?

Tim takes the reader on a journey by abstracting away the complexity of a dense topic, layer by layer. He dives into a concept, defines it really well and often gives it an ingenious name. Then going forward, he only has to mention the name to summon the concept in the reader’s mind. But what is particularly unique about Tim, is that when he is laying down the abstractions, they sometimes seem like tangents, maybe even insignificant at times. But their purpose becomes apparent later in the post when they serve as a powerful analogy or mental model. And having read many of his posts, I know Tim is very deliberate about which tangents are important to go on.

For example in the Chef vs Cook post, we are told about flood geologists and science geologists and how each group went on to “reconcile the large number of seemingly-very-old Earth features with the much shorter timeline of the Earth detailed in the Bible.” At first it might seem like an unrelated detour in understanding “Musk’s secret sauce”. We’re told, the flood geologists started off with the fact that “the Earth began 6,000 years ago and there was at one point an Earth-sweeping flood” whereas the scientists refused to take into account any assumptions unless they were backed by data. It turns out to be a perfect analogy for thinking about the concept of reasoning from first principles versus reasoning from analogy. This probably doesn’t make a lot of sense out of context, so if you haven’t already read this blog, I highly recommend it.

The most impactful aspect of Tim’s abstraction method is how memorable they are. He taps into our natural gravitation towards stories, images, humour and naming things.

When I’m eagerly waiting for his posts, I like to imagine him in his writing cave; his right arm being pulled by the instant gratification monkey and his left arm pulled by the panic monster. Maybe once in a while he comes out of his cave at the request of his social survival mammoth, only to be sent back by his chef software.

But it’s always worth the wait.

Posts that make you think

Posts that make you laugh